Then I remembered how improbable a word I will be using a lot in the following paragraphs the story is, and how improbable it would be that anything I say would make any sense when taken out of the context of the story. If I told you that cows that begged to be eaten were somehow able to construct the dexterity to lay out a napkin on Arthur's trouser leg so they can serve themselves, would you believe that was even in the book?

However, no one ever gets on the train as they have failed to come up with an accurate system of taking on new passengers due to faulty math in the higher levels of the reservation department for the theme trains. Therefore, there is a waiting list several lifetimes long that never grows shorter.

There is one instance however of an Agnorkian theme train stopping to re-fuel with fresh imaginations. It was because the train had become infested with Moreanian spore worms, who eat into the brain and make every one a complete bore. It is unknown how the spore worms got onto the train in the first place, but several bat like creatures were seen giggling hysterically near the windows of the train after the incident.

Before he died, Adams was vocal about his desire to continue telling the story of Arthur, Zaphod, Trillian and the others. Especially considering how overcast with a chance of rain and fog Mostly Harmless was. Adams, "I suspect at some point in the future I will write a sixth book. People have said, quite rightly, that Mostly Harmless is a very bleak book.

And it was a bleak book. I would love to finish Hitchhiker on a slightly more upbeat note, so five seems to be a wrong kind of number; six is a better kind of number. Sadly, Adams died without finishing the sixth book. He had compiled a good stack of notes before his trip into the depths of the universe. It was these notes that prompted his wife and daughter to recommend that the sixth book be written.

Enter Artemis Fowl author Eoin Colfer. Colfer was tasked with the heavy mantle of taking over an iconic work of fiction, much to the chagrin of the hardcore Hitchhiker fanboys. To them, it was improbable that another author would be able to capture the wit and dry sarcasm that inhabited the series, not to mention the ability to constantly create a universe with infinite depth. All of which of course made it very probable for such a thing to happen. Armed with Adams' notes, an established wit and a vast amount of improbability Colfer did write the book. Now, let me preface this by saying that Adams was a great writer, but he had written himself into a corner with the Hitchhiker's series.

Not a corner with no possibilities, but a corner with endless possibilities. The universe he had created was constantly changing, he could add in whatever he wanted and take out whatever he wanted, just by writing some improbable reason for it happening. In this style, it would be easy for another author to take over without having to stick to a preset canon and getting heat for it. Colfer has continued and created a new universe in the Hitchhiker's series. In reading the book, I cannot tell what may have come from Adams' notes and what may have come from Colfer's head.

In its own strange way, the book makes sense. We all know what happened at the end of Mostly Harmless Earth is destroyed again, multiple universes and so on, but in the universe that Adams created it doesn't matter much. The improbable will and can happen, and it does. Colfer has that storyline wrapped up and moved on within the first chapter. In a sense, similar to the trend of late of rebooting franchises it can be surmised that now this franchise too has been rebooted. Guide Note: Many things in the history of the universe have been rebooted.

This is not a concept new to the universe, however within the entertainment industry in 21st century Earth, it seemed to be.


Even though Earth itself was rebooted several times across several different dimensions, most famously by the Magratheans. This type of rebooting is not be be confused with that of a cobbler, who simply makes new boots when the old ones have worn down.

And Another Thing, By Eoin Colfer | The Independent

Colfer has done a good job of creating a new storyline with the same characters and a few new ones that have been imperative to the Hitchhiker's universe. Zaphod is the same self obsessed half moron he's always been with a slight twist, I'll leave that for you to find out. Ford is well written as well, oblivious to most events or at least passively accepting of whatever fate feels necessary to dish out.

Arthur is still the same lovable Englishman, searching for a good cup of tea and generally nervous about any type of activity that appears too good to be true. Throw in a god, an immortal with a god's ship, a planet full of rich people and their house servants and then of course, the Vogon's, and you have all the ingredients for an improbable adventure.


Warning - possible spoilers. This is the part where I talk about the plot. As for the plot, well it's quite simple really. Then they in turn are saved by the improbable arrival of the immortal alien though once off the planet, no one is any longer an "alien" Wowbagger, who is on a cross universe mission to insult every one in existence.

He takes them aboard his ship composed of dark matter, which used to be owned by the Thunder God Thor, under the condition that Zaphod recruit Thor to kill Wowbagger as he's pretty much tired of existence. Yet, completely defeating my scepticism about such ventures, Eoin Colfer has achieved the best post-mortem impersonation I have ever read. 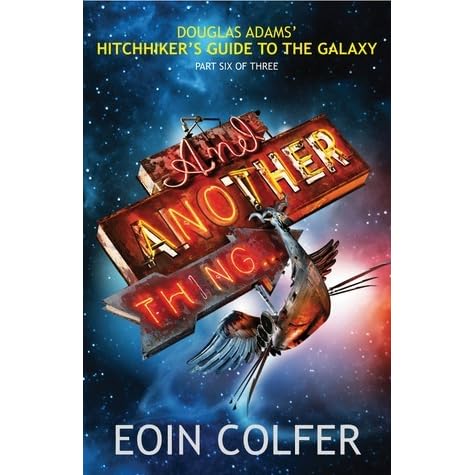 If Adams's family had chosen to tout this manuscript as an original novel discovered in a cupboard, their subterfuge would have been hard to rumble. At worst, we might have suspected that a new editor had worked on the text. Adams was a reluctant writer, and this difficulty of composition sometimes revealed itself in a looping, convoluted style.

Colfer's prose is crisper and simpler, but he has absorbed the spirit and detail of Adams's comedy to a remarkable degree. The creator made a sixth book difficult by destroying most of the familiar characters — including Arthur Dent, baffled refugee from the destroyed planet Earth — at the end of Mostly Harmless.

Just as Faulks stayed close to Fleming in his new Bond, Colfer spins off from the original plot: Arthur returns to his home planet, or something like it, to find it at risk of being destroyed, which is where he went out.


Most of the names and proper nouns in the book are trademarked to Adams — Dent's friend Ford Prefect, the spaceship Heart of Gold — but the ghostwriter makes site-appropriate additions, so that Ford is joined in the cast-list by Hillman Hunter, an Irish philanthropist and egotist who might be played in any movie version by Bono. There are also many aliens, described in amusing italicised "guide-notes": "The 'Goth' phenomenon is not confined to planet Earth.

The fact of Adams's name and franchise title being on the cover of a book he wasn't here to write also lends an additional, if surely intentional, charge to Colfer's many references to the randomness of the universe and the many possibilities of death: on one page, dozens of Arthur Dents die simultaneously in stupid ways in parallel universes. This must be a poignant autumn for Adams's family and friends, with two of his projects carrying on in other hands: apart from this sixth Hitchhiker , Stephen Fry has replaced Adams in a television and book revival of his Last Chance to See project with zoologist Mark Carwardine, cataloguing potentially extinct animals.

But the fact that such demand exists for these continuations is a tribute to the durability of the writer's reputation and influence — Russell T Davies's spectacular re-imagination of Doctor Who was very much in the Hitchhiker tradition — and this afterlife for his franchises is some consolation for the early loss of him.